Our high-gloss top coat is formulated to combat nail art smears and smudges.

Love this top coat as I can paint it on almost straight away after stamping a design on my nails without smudging. Awesome!

K
Karin
🤔Q: Who Needs a 2nd Top Coat? A: Anyone Who Doesn't Want to Ruin Their Nail Art!👍

After one too many smudged nail "artworks", over which I'd pored way too much time to admit, I realised I needed a TRUE Smudge-Resistant Top Coat. So, when this popped up (as a till suggestion) in one of MoYou-London's (several) sales, I felt I had to try it.🤷‍♀️

Now, I'm a Seche Vite (SV) addict, to the point of now buying it in professional-sized bottles!🤦‍♀️ FYI, I *always* use dedicated base coat & top coat products to prevent early chipping. But I must admit, while SV dries my nails VERY quickly--eventually rock hard & smooth, AND making my manicures last way past my being bored of them, i.e. week+--SV smudges.😞 As a true top coat, it works by penetrating the under-layers, re-wetting them, often causing the polish to flood any design "boundaries" before setting. Even with the most generous careful thick "float", SV would drag through my finely stamped designs.😭

So, I tried this *MoYou-London* Smudge-Resistant Top Coat--don't know if it's the same formula as that from "Nails MoYou" (different company🤨)--& EUREKA❗❗😂 Although MoYou's SR Top Coat brushes on too thin to "float"--fresh bottle--as promised, the fine lines I'd carefully stamped from my new MoYou-London Africa 12 plate were preserved! Hallelujah!🙏

Now, the surface did remain slightly tacky for longer than SV, but that was to be expected. But it dried quickly enough that, next morning, after my late-night nails session, there were no frustrating woven bedding imprints or dents!⭐😊👍

So, why 1 star removed? Well, later that morning, I did notice a little shrinkage at the cuticles & tip edges. Also, the thinness of the formula meant the finished nail surfaces weren't as smooth (or shiny) as I'm used to--I could feel the stamped images. Although it does imply a little MoYou goes a long way!💰👍 So, I simply applied another coat of my trusty SV--others "tacos" are available😉--& prayed. It worked; best of both!🙏 Every fine line remained in place--e.g., thin straight lines stayed straight--combined with my usual full glossy smoothness & sealed edges! Phew!😌

👉So, my personal recipe will be SV over the base colour layers, before stamping, & optionally as a final (next day) coat. But, use MoYou-London's *SPECIALITY* SMUDGE-RESISTANT TOP COAT💅--after the stamps have dried--to lock in those carefully stamped fine lines... & other nail design details, like sealing decals & appliqués, without resorting to gels & UV lamps!😊👍

Amazing top coat, no smudges, perfect consistency and dries as quickly as any other quick dry top coat.

Without it my nails usually chip within 24 hours (I'm super rough with my hands), but with this I'm chip free for over three days - it's my go to top coat regardless of if I've stamped or not.

Please do not discontinue this or change the formula. 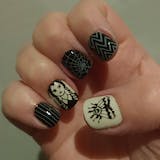 I was hoping for a better result with this smudge resistant top coat - tbh it performs the same as any other nail top coat and therefore it’s pricey for what it is, only 3 stars from me

E
E.H.
Definitely worth getting the MoYou specific topcoat

At first I figured I could use the topcoat I already owned, but I found it smudged all the nail art really badly. However this smudge-proof one is really great and I've had no issues with my art smudging since I started using it! It also works really well for making decals and reverse stamping.